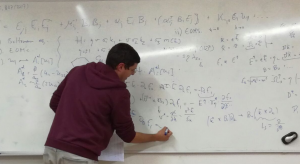 Me, messing up as many complex units as I could

Welcome to the home page of Alberto Cortijo.

My current interests are:

In the context of High Energy Physics, the spinor structure comes as a consequence of the marriage of special relativity (invariance under Lorentz transformations) and quantum mechanics. In Condensed Matter Physics, we also have «Diracness», that is, some crystalline systems can be described by the Dirac equation in many possible ways: in two or three spatial dimensions, with or without mass, etc. The reason is that in these systems the Bloch theorem becomes «naughty»: many bands are close to the Fermi level so a simple-minded scalar (one electronic degree of freedom) wavefunction approximation becomes insufficient. Some crystalline symmetries and the multicomponent character of the wavefunction mimics the Dirac structure and the (exotic, from the perspective of Condensed Matter Physics) phenomenology associated to it, in particular, to the notion of quantum anomaly.

One of the new trends in Condensed Matter Physics is the search of materials and properties that have something to do with geometrical quantities (and their topological properties) associated to the quantum states describing such materials/properties, being perhaps the most common example the Berry phase. These Berry phase effects naturally appear in electronic systems enjoying translation invariance, where the Bloch states parametrically depend on the momentum vector. Of course, there is much more out there, and topology enters in many other systems, and whenever one can define a movement in some parameter space. I’m interested in electronic topological states of matter as well as manifestations of Berry phase physics in other systems, like photons.

What I find interesting of many of these two dimensional materials is that there is a curious interplay between electronic and elastic degrees of freedom, similar (but not equal!) to the coupling to electromagnetic fields. This electron-phonon vector coupling gives rise to interesting physical phenomena.