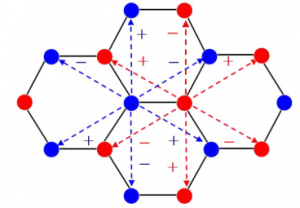 Symmetry Protected Topological (SPT) phases are kinds of zero temperature states of matter characterized by having a gap, some symmetry, and some topological invariant in such a way that any topological phase characterized by some value of the topological invariant is not smoothly connected to others with different invariants by any perturbation that preserves the symmetry unless a phase transition (gap closing and reopening) occurs. The transition can take place without closing the gap if the perturbation breaks the symmetry defining the SPT.

The non-trivial SPT states show gapless surface (edge) states that are protected against perturbations that respect the symmetry. Although these SPT phases can be bosonic or fermionic, the fermionic ones are the most studied ones in Condensed Matter Physics, being the topological band insulators the prototypical example.

The published works along these lines are:

[2] Charge instabilities and topological phases in the extended Hubbard model on the honeycomb lattice with enlarged unit cell.