I have been working in the frontier between quantum field theory and condensed matter for some time now. You can find a list of my publications in the arXiv au: Vozmediano.

Here I will select and comment on my favorite works – that do not coincide necesarily with the most cited or these published on higher impact journals-.  I will follow a chronological order. 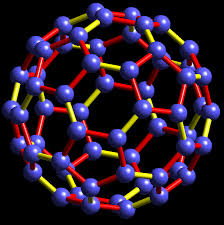 Lattice of the C60 molecule

One loop Feynman graphs in QED

Correction to the local density of states in a wide region around two pairs of heptagon–pentagon defects located out of the region for increasing values of the energy. 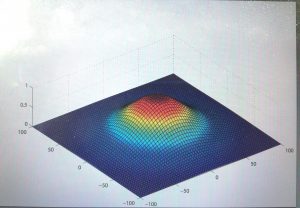 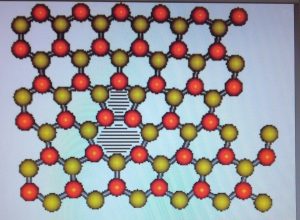 A glide dislocation in the Honeycomb lattice

As an indirect consequence of this work we extracted in 10.1103/PhysRevB.88.155405  all possible electron-phonon couplings allowed by symmetries in graphene thanks to the deep knowledge of group theory of Juan Mañes. This very complete work has been later extended to 3D (more fun) Weyl semimetals with my student  Vicente Arjona  in 10.1103/PhysRevB.97.201404. 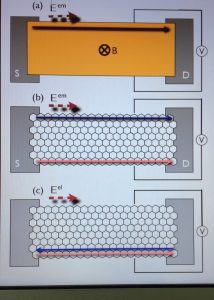 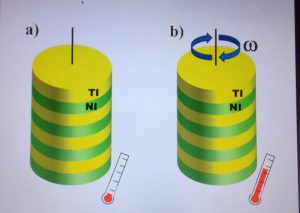 Generation of a Nernst current from the conformal anomaly in Dirac and Weyl semimetals, Maxim Chernodub, Alberto Cortijo,  and María A. H. Vozmediano, Phys. Rev. Lett. 120, 206601 (2018).arXiv:1712.05386. Interacting Dirac and Weyl semimetals are scale invariant at the classical level. The conformal anomaly gave rise to a «Scale magnetic effect» in an interesting paper by Maxim Chernodub «Anomalous Transport Due to the Conformal Anomaly» arXiv:1603.07993. We traded the gradient of the conformal factor by a temperature gradient using the ideas given in the cornerstone work by Luttinger on thermal transport coefficients: https://link.aps.org/doi/10.1103/PhysRev.135.A1505.