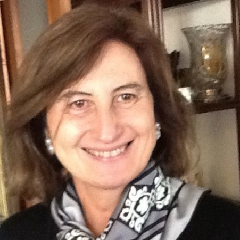 Gloria Platero is Research Professor at the Theoretical Condensed Matter Departament, at the Materials Science Institute of Madrid (CSIC).

Gloria received her PhD degree at the UAM (Universidad Autónoma de Madrid) in 1984 under the supervision of Prof. F. García Moliner. Her research during the PhD was devoted to the theoretical analysis of surface phonons and scattering of atoms in surfaces, she also did a research stay at the Milano University during this period to collaborate with Prof. G. Benedek.

Before her postdoctoral stay abroad she got a six months contract at the UAM to work on the electronic structure of semiconductor heterostructures and metal-semiconductor interfaces. After this period she obtained a NATO fellowship, and afterwards, a MPI contract at the MPI High Magnetic Field Laboratory in Grenoble where she spent about two years as postdoctoral researcher. There she collaborated with Prof. M. Altarelli. During this time, her research focussed in the electronic and optical properties of semiconductor quantum wells and superlattices under strain and external magnetic fields, in particular she analyzed the hole band structure of quantum wells. After that she obtained a postdoctoral fellowship at the UAM, where she was Honorary Professor for eight years, and began to work in quantum transport in semiconductor heterostructures as double quantum wells and superlattices under magnetic and ac electric fields.

She got a permanent position in 1987 at the Solid State Physics Institute of Madrid, at the Spanish Research Council CSIC. From this time till now she was promoted to Senior Researcher and then to Research Professor in 2005.

She was involved in several EU networks and she was invited to do research stays in different laboratories as PTB (Braunschweig), University of Hamburg, MPI Stuttgart, UTB (Berlin) , Aalto (Helsinki), NRC (Ottawa), UBC (Vancouver) etc…
She has adviced several PhD students, more than half of them working in academia.
She has founded a research group at her institute on quantum transport at the nanoscale, which became recently the research group of: “New Platforms and Nanodevices for Quantum Simulation and Quantum Computation”

At present Gloria is member of the IUPAP (C8 Semiconductor Physics), and Mercator Fellow of the Collaborative Research Center “Emergent Relativistic Effects in Condensed Matter, from fundamental aspects to electronic functionality” at the University of Regensburg (Germany).

Her research areas of interest belong to the Quantum Computation and Quantum Simulation topics in the field of Quantum Nanotechnologies.
In particular her research has been focussed in charge and spin quantum transport in semiconductor nanostructures, spin qubits in quantum dot arrays, quantum state transfer in solid state platforms, ac-driven quantum transport etc..
Also other active research line in her group is the analysis of the topological properties of low dimensional systems, in particular ac driven (Floquet) systems. She investigates the interplay between the topology and driving of low dimensional systems, as well as the effect of interaction. The role of edge states in the electron charge and spin dynamics is also a topic of her present research.