I has been  involved in outridge  from the very beginning of my scientific carrier partly due to my friendship with excelent high school teachers as Pepe Colera and Ana Cañas, example and inspiration for all teachers. During my first graduate studies I wrote a high school  Physics text book with Ana from whom I learned a lot. All these years, I gave popular talks in the public institutions where they taught. No electronic media then. Below are examples of more recent activities. 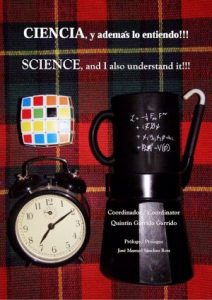