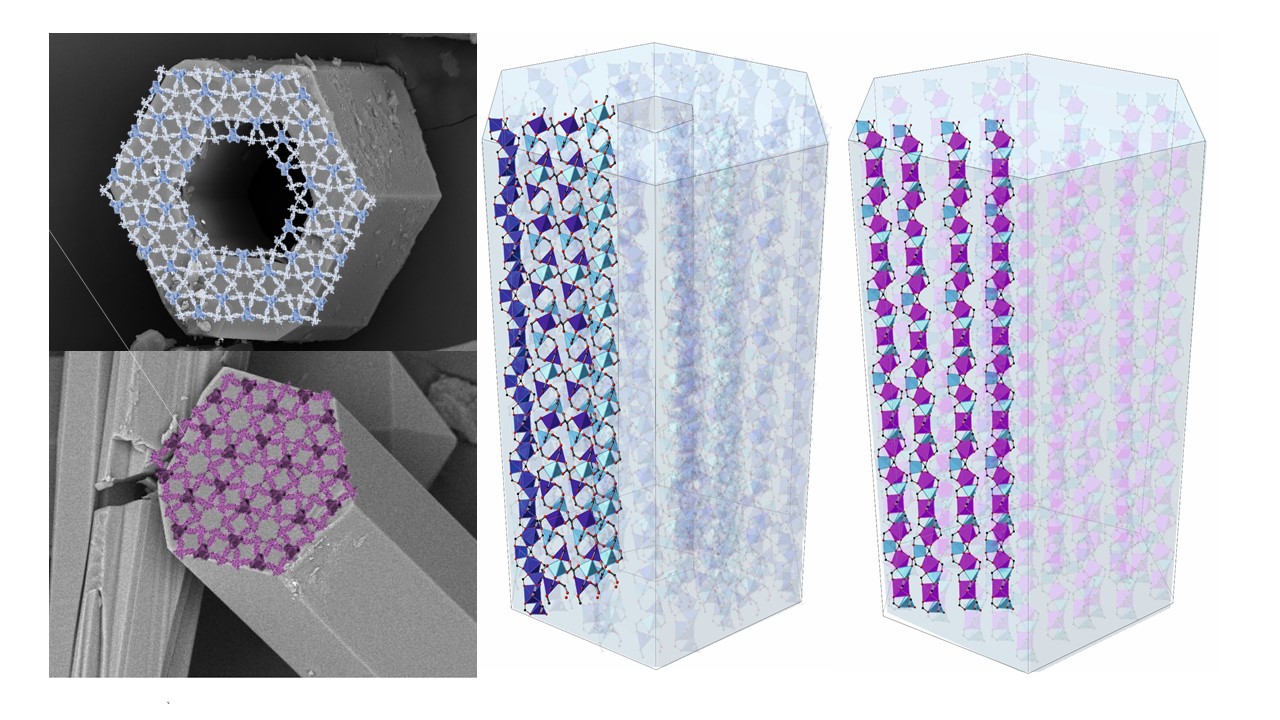 Complex, sequenced multi-metal MOFs comprise inorganic rod-shaped SBUs composed of multiple metal cations whose atomic arrangement is controllable. The combination of specific metal elements at judiciously selected molar ratios results in materials with unique elemental sequences, or with combination of various sequences mesoscopically distributed along the crystals, as demonstrated with the combination of multiple techniques such as X-ray and neutron diffraction, or electron microscopy. 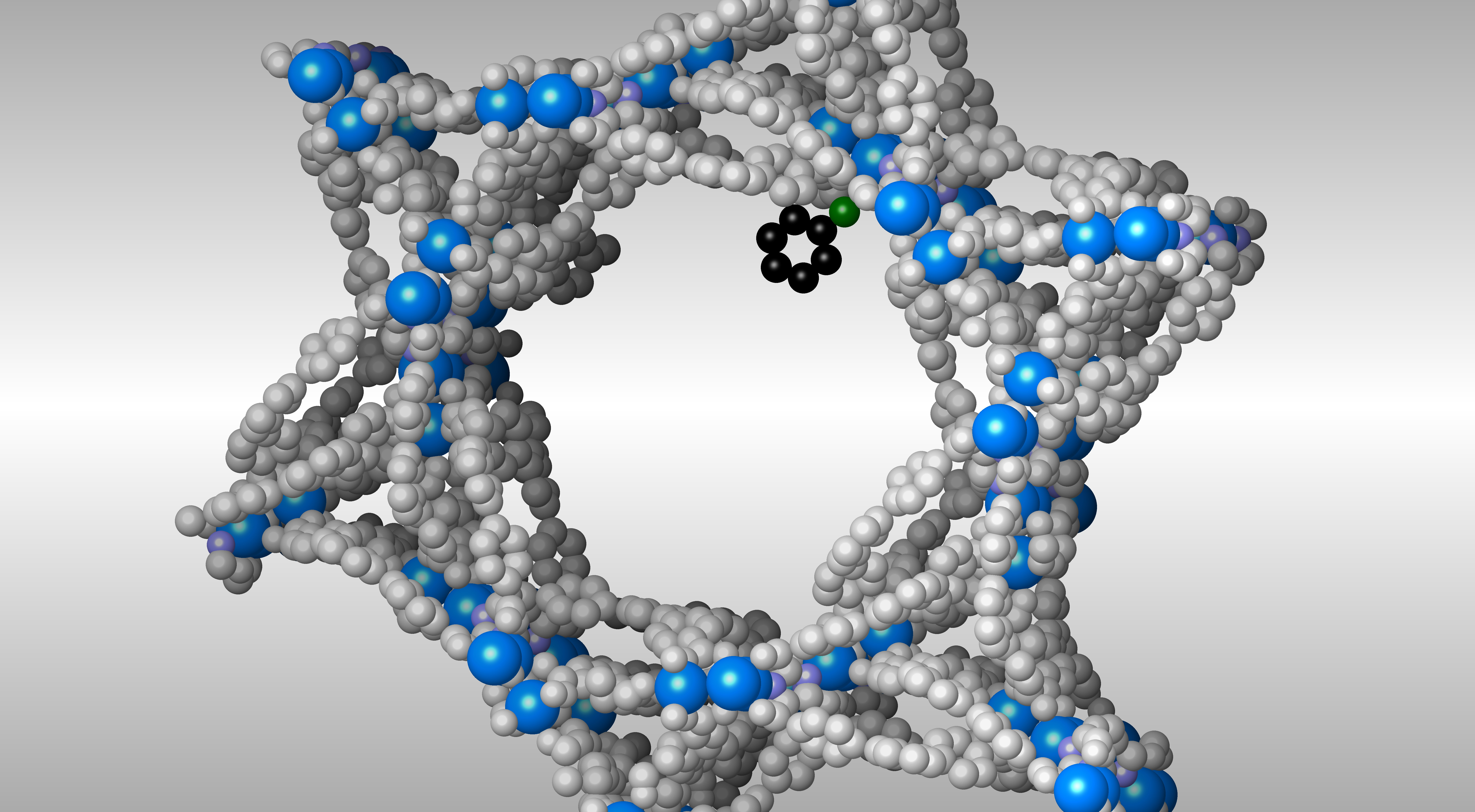 InPF-110 is a mesoporous MOF made of indium as metal center. This MOF has pores with apertures of 2.8 nm, allowing the diffusion of multiple substrates through its structure. Thus, organic transformations that require multiple substrates to find a large number of active sites are efficiently catalyzed by this material. This is the case of the Strecker reaction of ketones, which readily affords functionalized α-aminoacids precursors, without need of heating nor solvents when catalyzed by InPF-110. 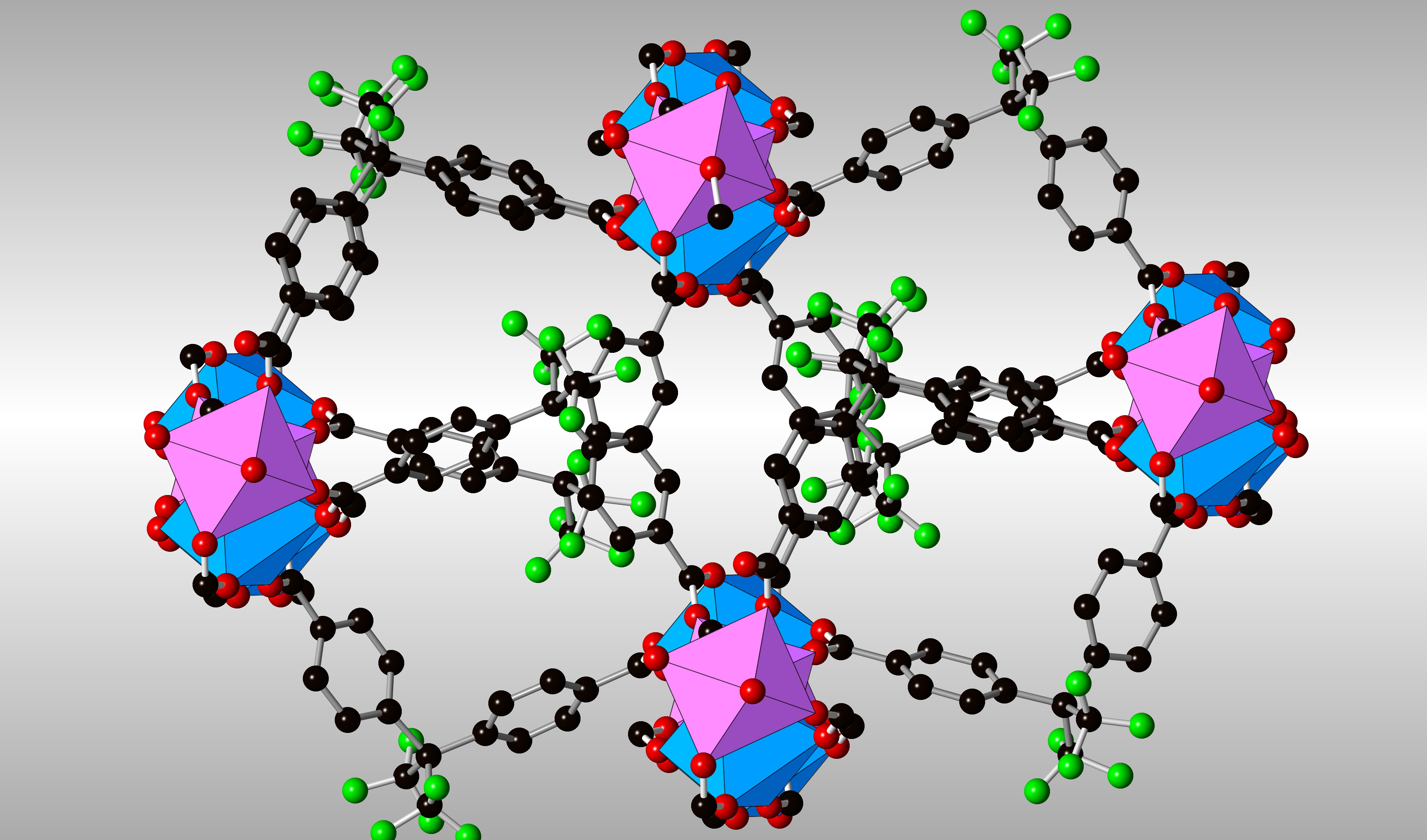 Solid solution MOFs, like the InGaPF series, are formed by a mixture of different metal cations (indium and gallium in this case) occupying the same crystallographic position within the framework. The addition of various cations in a same structures provides the ability of controlling the catalytic activity of the resulting material in complex multicomponent reactions. 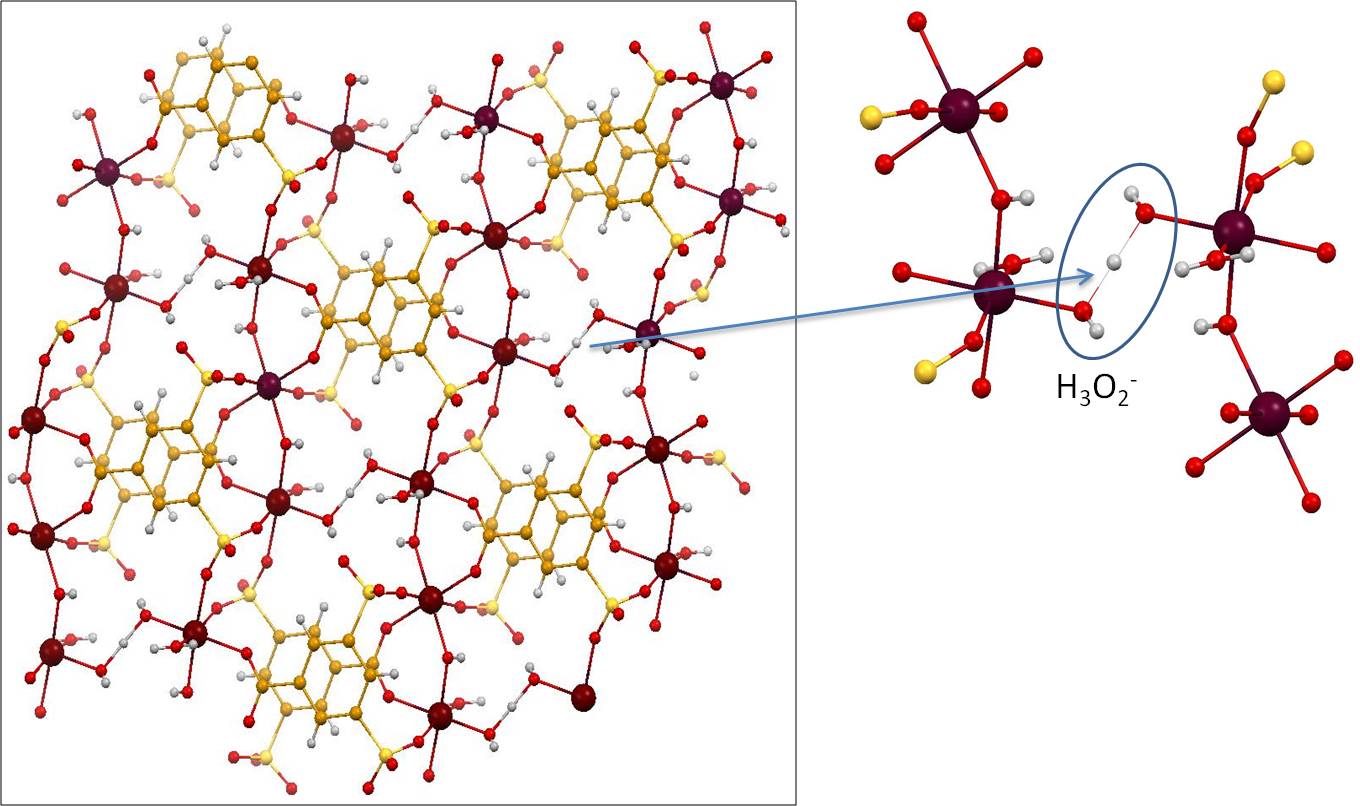 This material, which is built up with scandium and 3,5-disulfobenzoic acid is the first MOF bearing the aqua-hydroxo species in the framework. Incorporation of this species is achieved with a fine control of the synthetic conditions that led to the isolation of a crystalline phase that is energetically less favorable than other competing phases.

«H3O2 Bridging Ligand in a Metal–Organic Framework. Insight into the Aqua-Hydroxo↔Hydroxyl Equilibrium: A Combined Experimental and Theoretical Study«, J. Am. Chem. Soc. 2013, 135, 5782 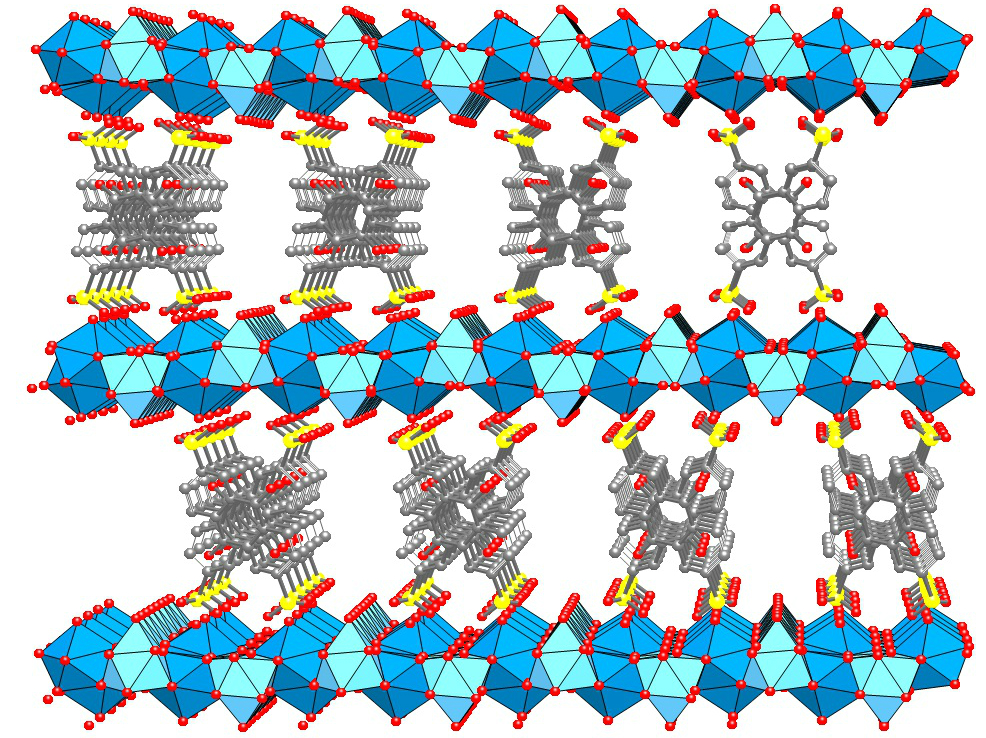 Layered Rare-earth Hydroxides (LRHs) are a family of intercalation materials consisting of cationic layers formed by rare-earth elements (blue polyhedra in the figure) and rigid, organic anions occupying the interlayer space. The interleyar distance is controlled based upon the length of the organic linkers. These materials are highly stable and have demonstrated exceptional activity as heterogeneous catalyst. 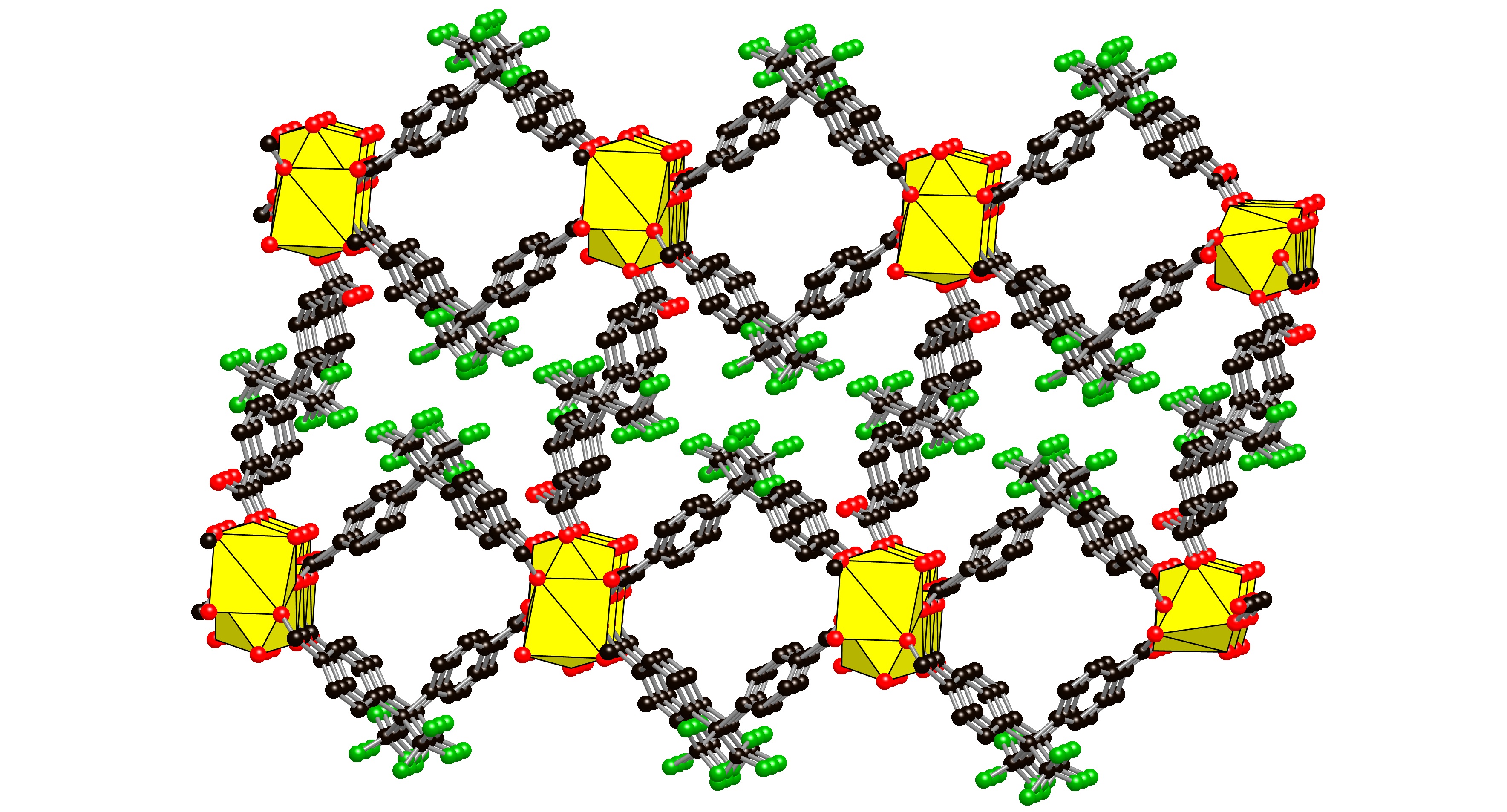 Alkali Earth Polymeric Framework (AEPF) are a class of MOFs where the metal atoms are alkali-earth elements. In the case of AEPF-1, the metal centers are made of calcium atoms (yellow polyhedra in the figure). This material serves as a highly efficient heterogeneous catalyst for the hydrogenation of styrene to form ethyl benzene under mild conditions. 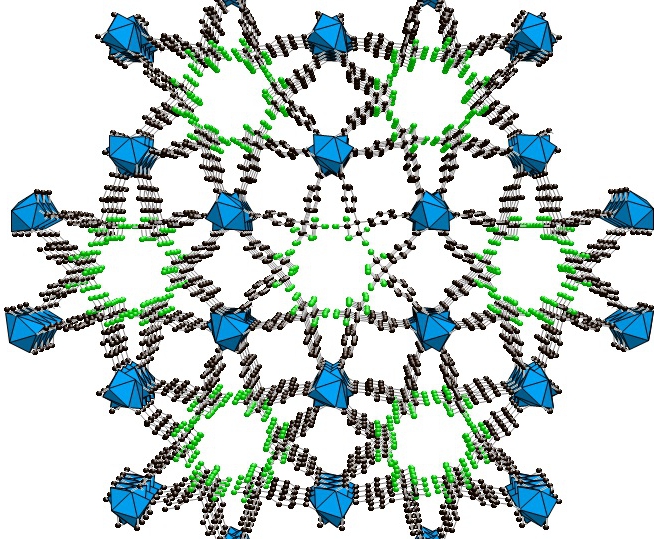 Rare-earth Polymeric Framework 4 (RPF-4) is a family of MOFs built with rare-earth elements and a fluorinated linker (in the figure, blue polyhedra represent Ln atoms, C is black and F is green). Isostructural materials can be made with the whole series of the lanthanide elements. These materials show interesting luminescence properties arising from the structural and topological features of the framework. 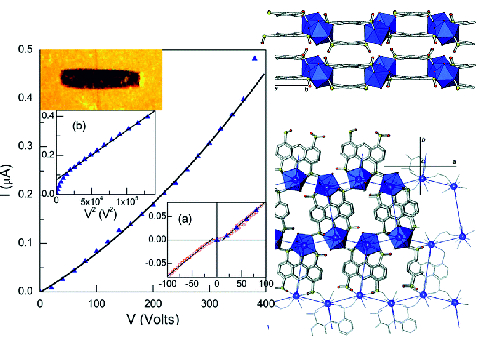 Rare-earth Polymeric Framework 8 (RPF-8) is a electric conducting MOF with high charge carrier mobility (μ = 9 cm2 V−1 s−1) . These properties are due to the use of an organic radical as building unit, and its favorable disposition into the framework by the coordination to the metal ions.