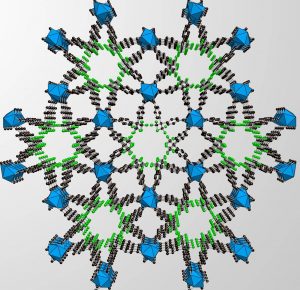 Reticular Materials are formed by the linkage of building blocks to form periodic structures with predefined topologies.

Metal-Organic and Covalent-Organic Frameworks (MOFs, and COFs) are two classes of reticular materials. MOFs are formed by the joint of organic linkers and metal atoms, while COFs are exclusively made of organic linkers. MOFs and COFs have many interesting properties, including high porosity, catalytic activity, conductivity or luminescence.

Research at our group involves the preparation and advanced structural analysis of new reticular materials, as well as evaluation of their properties.

Depending on the sought application, MOFs can be designed by the choice of their building components and the synthetic conditions that led to the formation of the desired phase. Thus, we have prepared several families of MOFs with the use of rare-earth elements, which we denote RPFs (rare-earth polymeric frameworks). RPF materials have interest because of their optic and catalytic activity.

Other non-transition elements, such as indium, scandium and alkali-earth elements, have also been employed in our group to prepare new MOFs. Scandium and Indium have strong Lewis acid character and provide the materials prepared with these elements with Lewis acid catalytic activity. On the other hand, MOFs with alkali-earth elements are less abundant than their transition element analogues, despite they are cheap, abundant, and non-toxic. Our series of AEPF (alkali-earth polymeric frameworks) have demonstrated that MOFs based on these elements may exhibit good performance as catalysts in reactions such as hydrogenation of styrene.

We have also expanded the structural richness of MOFs chemistry by the use of organic linkers with functionalities previously under-explored. We have also explored the use of sulfonate based ligands for the preparation of MOFs. While carboxylate based linkers are the most extensively employed ligands, the use of sulfonate ligands can also provide a platform for the formation of structurally rich extended structures.

In addition to the synthesis and evaluation of properties of new MOFs, we are devoted to the structural and topological analysis of these fascinating materials. Thus, we combine experimental and computational studies to better understand the different factors that affect the synthesis of MOFs and result in the formation of different materials.

Structural analysis of COFs involves the combination of computer simulation and experimental diffraction techniques, supported by crystallographic and topological knowledge. Over the years, we have  determined the structure of a number of new COFs