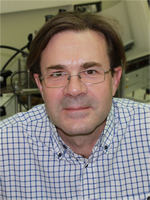 Got his B.S. degree and Master degree in Chemistry (Electrochemistry) in 1989 and 1990, respectively, at the U.A.M University. Got his Ph .D in Chemistry by the U.A.M. university in 1994. He had a postdoctoral stay at the “Laboratoire de electrochimie et physico-chimie of solids and interfaces” at the ENSEEG in Grenoble (France). After this period he entered the Ferroelectric Materials Department at the ICMM/CSIC in Madrid (1997). He had an advanced grant (Ramon&Cajal Program, Spanish MCyT) from 2001 to 2005. From June 2005 he is Permanent Staff  of CSIC, Tenure Scientist, at the Department of Ferroelectric Materials.

He has participated in several European research activities as the project: ”The Synthesis, Characterization and application of pillared layered clays” (BRITE /EURAM II), the COST514 and 528 actions. He was participant in integrated actions with Portugal (Departamento de Engenharia Ceràmica e do Vidrio, Univ. Aveiro) on “Ferroelectric thin films: preparation and characterization” (2001) and France (Univ. Nancy) “Ferro-piezoelectric thin films for SAW and DRAM devices: preparation and characterization of the physical and chemical properties”.  Has participated in more than 11 national research projects. Nowadays is project leader of “The study of the ferro-paraelectric phase transition in modified lead titanate with high Ca content and its microelectronics applications” (MCyT y C.S.I.C) and the integrated action with Brasil (Universidade de Fortaleza Ceara Dep. Physics (LOCEM)) on “The study of high permittivity materials with perovskite structure”.