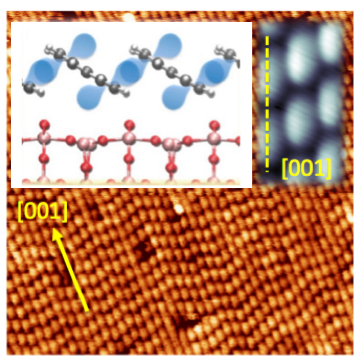 Organic molecules used as functional building blocks on technological surfaces are the basis of future electronic and optoelectronic devices. For this reason, the understanding of the assembly of organic layers on surfaces is of major relevance for applications as light-emitting diodes, organic field-effect transistors o molecular electronics. Within this frame, the dielectric surfaces formed by transition metal oxides represent a family of large-gap transparent semiconductors that are crucial for the development of next-generation devices.

In this research line we aim at understanding the assembly of organic layers in dielectric surfaces and the structure on new metal-organic networks of variable dimensionality. Among all metal oxides, TiO2 is considered as the model one for surface science experiments, since good quality surface terminations can be easily obtained. Additionally, it has acquired technological importance due to its performance in gas sensing, anti-corrosion coatings, photochemistry or heterogeneous catalysis. For this reason, in the ESISNA group we study the reactivity of the TiO2(110) surface towards organic molecules, as it is the case of pentacene, C60, PTCDI, C60H30, perilene molecules, etc., making use of different experimental surface techniques such as STM, XPS, LEED and NEXAFS combined with theoretical calculations. 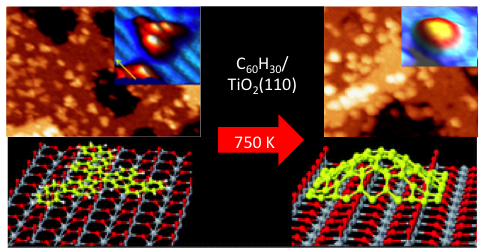