Surface nano-patterning by ion beam sputtering (IBS) is a bottom-up strategy to produce nanostructures on large areas of a wide range of materials (metals, insulators, semiconductors) in just a few minutes. This technique has been known for many years but its underlying physical mechanisms are still open to discussion. Initially, it was thought that these processes were rather universal, i.e., independent of the specific ion-target combination. However, recent experiments have shown that this is not the case. In particular, this work focuses on the case of an Ar+ or Xe+ ion beam impinging at oblique angles on a silicon surface, which results in the formation of nano-ripple patterns provided that the angle of incidence is above some threshold value. The paper is both an experimental and a theoretical study of the mechanisms which may govern the nano-ripple formation. We have characterized by AFM the dependence of the morphology of the ripple pattern on the ion species employed. In addition, we have studied by TEM the thickness of the amorphized surface layer that appears due to irradiation and the interface between this layer and the bulk, undamaged, silicon. These results have been used to develop a multiscale theoretical approach, which combines molecular dynamics simulations with a continuum, viscous flow model. From this model we show that the non-uniform generation of stress across the damaged amorphous layer is a key factor behind the range of experimental observations. Moreover, as the form of the stress field is controlled by the ion/target combination, this mechanism can account for the experimental observations on the influence of such combination in the properties of the ripple pattern. This work has been made through a collaboration with other researchers of ICMM, Universidad Carlos III de Madrid, Universidad Autónoma de Madrid, and Universidad Pontificia Comillas. 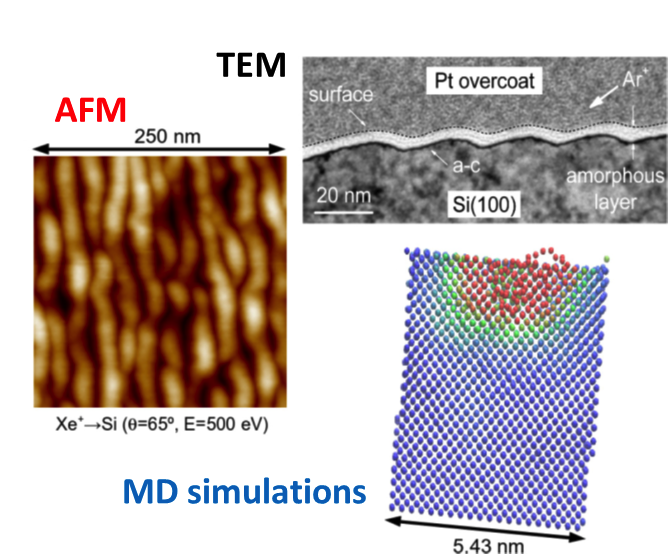