A pioneering development at SGG, is based on a new concept of “electroactive organic molecules in glasses”. In other words, the possibility of manipulating the optical properties of molecules by means of an external electric field. These new materials can be used in a very wide range of applications.

This development consists on the microencapsulation of liquid crystal (LC) droplets dispersed in Sol-Gel glasses (films of 2-3 μm of thickness). The first prototypes of optical switches controlled by electric field prepared with this new material have been developed in our laboratory and patented under the name of GDLC® (Gel-glass Dispersed Liquid Crystal).

The operation of a GDLC (see Figure) is based on the strong light dispersion (scattering) of the device in the resting or opaque state (OFF), that becomes transparent when an external electric field is applied (ON-state). No polarizers are needed for its operation and switching times between OFF and ON states are about 1 ms. Some of the remarked GDLC applications are switches or optical shutters, visualization screens, and the so-called “intelligent windows” for application in houses or offices.

Operation of a GDLC device switching between the opaque (OFF) and transparent (ON) states. The incident light is dispersed by the LC microdroplets in the OFF state while during the application of an electric field a transparent material is obtained

The LC macroscopic ordering in the formed droplets is controlled by the surface anchoring induced by the hybrid silica surface:

• The balance between the surface anchoring and the bulk elastic properties of the LC (minimization of the free elastic and surface energies) determines the molecular configuration of the LC molecules.
• The molecular orientation of the LCs can be achieved by directionally functionallized surfaces. 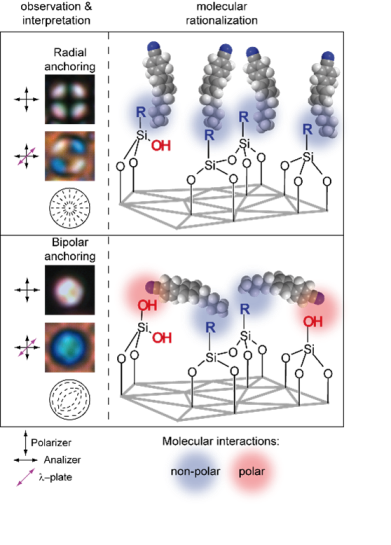 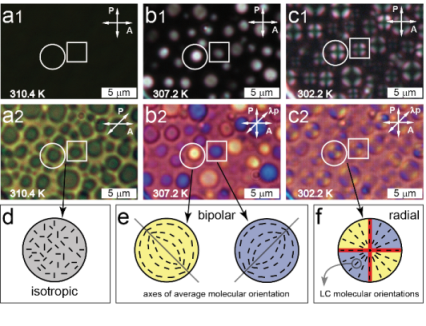 Different LC configurations in the droplets (isotropic, bipolar and radial)

Research on how to control the optical properties of the GDLCs, their morphology, thickness, and chemical modifications, by tailoring the preparation parameters is necessary to optimize electrooptical response. 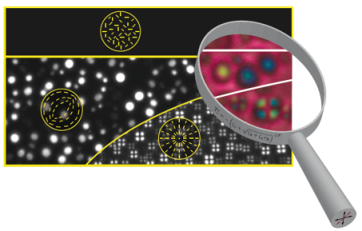 LC configurations vs. composition of the matrix and temperature

E. Castellón, M. Zayat and D. Levy, A model for the study of the optical transmission dynamics of liquid crystals dispersions under the influence of an electric field, European Physical Journal E 2010, 32, 81-87.