The SGG in close collaboration with LINES – Laboratory for Space Instrumentation – part of the Area of Payloads and Instrumentation of the department of Space Science and Electronic Technologies of INTA, intend the development of material research lines oriented to novel Aerospace applications. These are mainly focused on optical materials. Some of them are:

One of the main Projes leaded by INTA was related to the first nanosatellite called NANOSAT-01 launched on board the Ariane 5. The satellite consist on an hexagonal device of less than 19 kg of weight and a diameter of about 50 cm, that describes a LEO orbit of 655 km of altitude. The main objective of the satellite is to probe the operation and performance of micro and nanotechnologies in space environment. One of the scientific experiments implemented on board was the sol-gel based magnetic nanosensor. 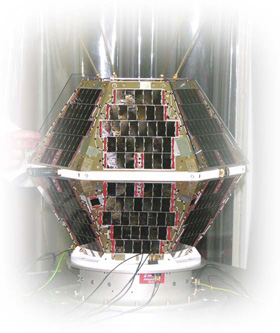 The magnetic sol-gel nanosensor will be responsible for the positioning and orientation of the satellite by the detection the Earth gravitational magnetic field. The sensor consists on a dispersion of γ-Fe2O3 magnetic nanoparticles in a transparent silica matrix prepared using the sol-gel procedure. This nanocomposite exhibiting the magnetooptical Faraday Effect was implemented as the heart of the magnetic nanosensor. The complementary systems, such as de the detection optics and the electronics required for the operation of the nanosensor, were developed accordingly to the requirements and performance of the sol-gel nanosensor. The design of the nanosensor and the complementary systems should also comply with the strong vibrations imposed by the launch procedures and the harsh space environment conditions. The nanosensor was designed for a 3-6 years lifetime in orbit.