An interesting pathway to affect the dynamics of the magnetization reversal in magnetic nanostructures is to introduce geometrical modulations to act as nucleation or pinning centers for the domain walls. Considering the case of 3D magnetic nanowires, the modulation of the diameter across their length produce such effect as long as the segment diameter transition is sharp enough. Here, diameter modulated Fe67Co33 ferromagnetic nanowires were grown into prepatterned diameter modulated nanopores of anodized Al2O3 membranes. Morphological and compositional characterization was carried out by electron-based microscopy, while their magnetic behavior was measured on both individual bisegmented nanowires and their arrays. The magnetic hysteresis loops, as well as First Order Reversal Curve diagrams, point out that the magnetization reversal is carried out in two steps interpreted by micromagnetic modeling, where a shell of the wide segment reverses magnetization first, followed by the reversal of its core together with the narrow segment of the nanowire at once. 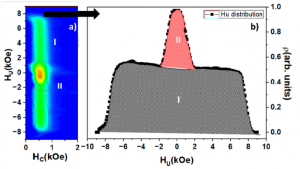 This research in collaboration with the University of Oviedo was funded by Spanish Ministerio de Ciencia e Innovación (MICINN) and Research Agency State (AEI), under grants number PID2019-108075RBC31 and PID2019-108075RBC32, and by the Regional Government of Madrid under the project S2018/NMT-4321