We report on the time-resolved dynamics of a single magnetic domain wall (DW) under the influence of a tunable barrier in a Fe-rich microwire. The energy barrier was created by applying a local magnetic field antiparallel to the uniform driving field used to depin and propagate the DW along the wire. This originates the braking and eventually the trapping of the DW depending on the magnitude of the antiparallel local field. The motion of the DW through the local field becomes stochastic for minimum magnetic field values close to the measured friction field (Hfr=24.4A/m). This phenomenon is caused by fluctuations in the pinning field associated to the different

types of local defects and residual stress existing in the wire. The probability for the DW to overcome the barrier has been estimated for different values of the local field. When the minimum applied field is lower than the fluctuating friction field the DW is always trapped. 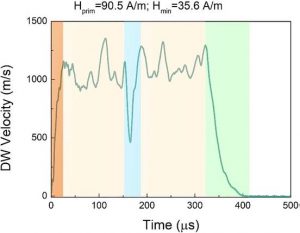 In the figure we show the time-resolved DW velocity for Hprim=90.5A/m and Hmin=35.6A/m. Different colors mean the different stages during the nucleation and propagation of the DW: orange the nucleation and acceleration, pale pink the movement at steady velocity, blue the braking by the local field and green the braking and stopping when it is close to the end of the primary coil.

This work has been supported by the Spanish National Research Council under CSIC Project No. 201760E040 and by Comunidad Autónoma de Madrid under Project S2018/NMT-4321 NANOMAGCOST

Alexander Valeriano Inchausti is incorporated to the group to perform research on Magnetism of Microwires focused towards his Master Thesis, TFM. Alex is enrolled as Master student of Physics of the Condensed Mater and Biological Systems, at the Faculty of Physics, Autonomous University of Madrid. 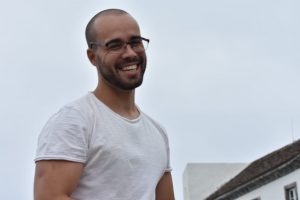 The need for flexible and transparent smart materials is leading to substantial advances in principles, material combinations, and technologies. Particularly, the development of optically transparent magnetoelectric (ME) materials will open the range of applications to new directions such as transparent sensors, touch display panels, multifunctional flat panel displays, and optical magnetic coatings. In this work, a flexible and transparent ME composite is made of magnetostrictive Fe72.5Si12.5B15 microwires and piezoelectric poly(vinylidene fluoride-trifluoroethylene). The high magnetostriction of Fe72.5Si12.5B15 (35 ppm) enables superior ME voltage response (65 mV cm−1 Oe−1) obtained at the critical longitudinal magnetic field equating the transverse anisotropy (14500 A m−1) on the external shell of the microwire memory devices.

Left) Photographs of the composite placed on a written page, with (TOP) and without (DOWN) the PEDOT conductive layers, serving as electrodes; Right) Optical transmittance of the composites measured from 350 to 700 nm.

This paper derives from the collaboration between our GNMP team with the Departamento de Física, Universidade do Minho, Braga, Portugal.

The traditional summer excursion of the group took place June 26th to visit Sigüenza, the old Castilian city which origin goes back to the Celtiberian Segontia. After the 2 hours walk by the pines and under a suffocating sun to the nearby Natural Park, we had a comforting lunch. It was followed by the cultural visit to the medieval Castle and the gothic Cathedral that hosts the famous tomb of the Doncel. 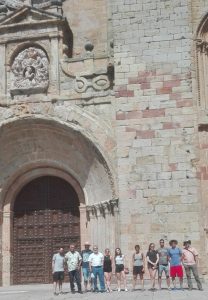 “Domain wall traps” have been engineered diameter-modulated (DM) cylindrical magnetic nanowires (NWs). A systematic study on the magnetization behavior, domain wall structure and its nucleation/propagation in tri-segmented diameter-modulated Ni nanowires was performed to investigate the magnetization reversal as function of segment geometry. Two distinct geometries include: dumbbell-type (type I) and rolling pin-type (type II). Based on experimental and theoretical simulations, it was evidenced that the wide-narrow junctions create trap sites for domain walls where the narrow segment restricts their motion. This type of geometrically engineered nanowires exhibit potential efficiency for future novel spintronic devices in particular when assembled in arrays as a practical 2D memory devices. 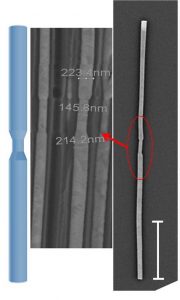 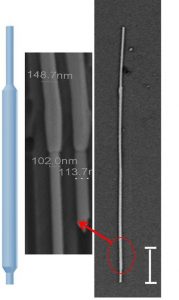 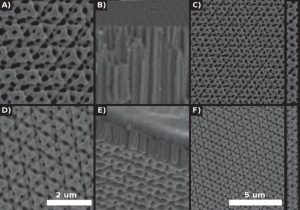 Jose Angel Fernandez Roldán defended his work entitled “Micromagnetism of cylindrical nanowires with compositional and geometric modulations” supervised by Dr. Rafael Perez del Real and Dr. Oksana Chubykalo-Fesenko, and the scientific advice of Prof. Manuel Vazquez, to become Doctor in Physics by the Autonomous University of Madrid. The defense was taken in June 3rd, and the work received the maximum qualification of Sobresaliente-cum laude by unanimous decision of the Doctoral Commission. 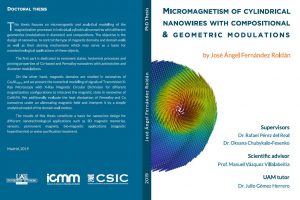