Hysteresis properties and magnetization reversal in TbCo(30 nm) and FeNi(10 nm)/TbCo(30 nm) films  with nanoscale antidot lattices are investigated to test the effect of nanoholes onthe perpendicular anisotropy in the TbCo layer and the induced exchange bias in the FeNi layer.The antidots are introduced by depositing the films on top of hexagonally ordered porous anodicalumina substrates with pore diameter and interpore distance fixed to 75 nm and 105 nm,respectively. The analysis of combined vibrating sample magnetometry, Kerr microscopy andmagnetic force microscopy imaging measurements has allowed us to link macroscopic and local magnetization reversal processes. For magnetically hard TbCo films, we demonstrate the tunability of magnetic anisotropy and coercive field (i.e., it increases from 0.2 T for the continuous film to 0.5 T for the antidot film). For the antidot FeNi/TbCo film, magnetization ofFeNi is confirmed to be in plane. Although an exchange bias has been locally detected in the FeNi layer, the integrated hysteresis loop has increased coercivity and zero shift along the field axis due to the significantly decreased magnetic anisotropy of TbCo layer.

END_OF_DOCUMENT_TOKEN_TO_BE_REPLACED 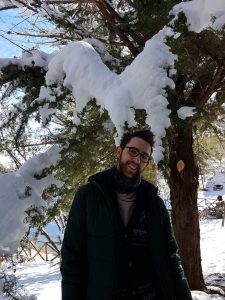 We welcome Miguel Ángel Pulido Lendínez, student of 4th course of Physics (Universidad Autónoma de Madrid). He joins our group until the end of June.  He is going to carry out scientific internship.

Title: Electrochemical techniques for the growth of magnetic nanowires and development of a MOKE device for their magnetic characterization.

We welcome Carlos Gutiérrez, student of 4th course of Physics (Universidad Complutense de Madrid). He joins our group until the end of August.  He is going to carry out scientific internship.

We welcome Raul Chamorro, student of 4th course of Materials Science Engineering (Universidad Complutense de Madrid). He joins our group until the end of August.  He is going to carry out scientific internship.