By tuning the applied magnetic field direction, both longitudinal and transverse multivortex states of different chiralities and peculiar 3D features such as shifted vortex cores are stabilized. The chiral domain wall between the longitudinal vortices of opposite chiralities exhibits a complex 3D shape characterized by a push out of the central vortex line and a gain in exchange and anisotropy energy. Exploiting these peculiar 3D spin configurations and their solitonic inhomogeneities is expected to improve magnetization switching in future spintronics, such as power-saving magnetic memory and logic applications 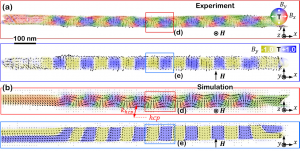 This work is the result of the international collaboration between our GNMP group, ICMM/CSIC, with the Centre d’Élaboration de Matériaux et d’Etudes Structurales, CNRS, Toulouse, and the Leibniz Institute for Solid State and Materials Research, IFW Dresden. It has been supported by Spanish MINECO under project PID2019-108075RBC31, and by the Regional Government of Madrid under Project S2018/NMT-4321 NANOMAGCOSTCM.