Systematic experimental results on the Matteucci effect in torsioned magnetostrictive FeSiB microwire are introduced observed during the propagation of a single domain wall (DW) under the action of axial driving magnetic field, Hdr. The Matteucci electromotive force (emf) is associated with depinning and annihilation of the DW. The emf amplitude is proportional to the DW velocity and the time derivative of the azimuthal magnetization, tailored by applied torsion. The clockwise/counterclockwise applied torsion dependence of Matteucci emf and DW velocity are experimentally determined for parallel and antiparallel Hdr. Asymmetric behaviors are observed for both, the sense of applied torsion and the direction of Hdr. The experimental data are discussed in terms of the magnetoelastic anisotropy introduced by torsion. Through analysis of the DW dynamics, such asymmetric behaviors are interpreted as a magnetochiral effect derived from the change of chirality of the propagating wall. 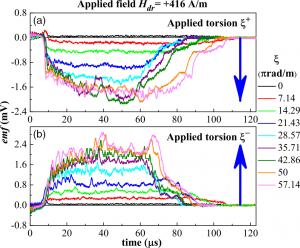 This Review Article is included in the special issue to celebrate the 60th anniversary of Physica Status Solidi, and it is a collaboration between our GNMP group and the Centre of Progressive Materials, P.J. Safarik University Kosiçe, Slovakia. It was supported by the Regional Government of Madrid under project S2018/NMT-4321 NANOMAGCOST-CM.