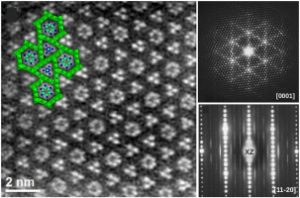 The disordered structure of the columnar misfit ​∼ ​PbCr2S4 phase (∼ character indicates that it is close to the stoichiometric composition but slightly away) has been revealed by means of transmission electron microscopy (TEM) varied techniques such as selected area electron diffraction (SAED), high-resolution TEM (HRTEM), dark-field TEM and high-angle annular dark field (HAADF) in scanning-transmision (STEM) mode. The structure consists of a hexagonal framework (Cr21S36), with unit cell parameters a0 ​= ​b0 ​= ​21.407 (1) Å and c0 ​  ​3.476 (1), and with hexagonal (Pb6Cr2S6) and trigonal columns (Pb3S) with the same a and b parameters and different c: c3 ​= ​3.98 Å; c6 ​= ​5.62 ​Å, measured by electron diffraction. While the framework exhibit no crystalline disorder, the arrangement of the two types of columns is disordered. This disorder is shown by electron diffraction as diffuse scattering planes which are perpendicular to the framework c axis and parallel to the a∗b∗ plane. While the disorder between hexagonal columns is due to the lack of correlation between different columns, we observe in the trigonal columns also the presence of intra-columnar atomic disorder. X-ray wavelength dispersive spectroscopy (XWDS) analyses produce Pb0.81(1)Cr2S3.97(6) composition. TEM imaging techniques suggest lack of correlation between trigonal columns as the cause for the observed disorder as well as inside-the-column structural disorder in Pb3S trigonal columns.