MoO2 thin films were subjected to a laser localized oxidation process that allowed to obtain different well defined MoOx phases. In particular, spatially resolved MoO2, α-MoO3, β-MoO3, amorphous a-MoO3, and Mo4O11 regions were obtained as a function of the laser power and the distance to the laser focus. The origin of this spatial phase separation was investigated through a careful and exhaustive Raman mapping study covering several micrometres away from the laser focus and taking into account the thermochemical properties of the species involved. It was found that a sublimation/deposition process, driven by the different vapour pressures of the species, was responsible for the phase separation. At higher laser power, a solid state reaction was observed to contribute as well. In the laser annealed tracks, distant lateral sidebands of oxide deposition were observed with composition that depended on the laser power and the distance to the centre of the track. Electrical measurements between irradiated and non-irradiated regions showed a strong rectifying behaviour, revealing a transformation from metal-like to semiconducting Mo oxide phases, which may open the way to the development of laser written all-oxide electronic circuits. 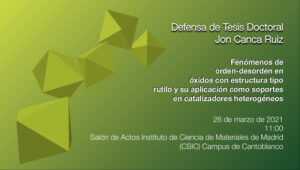 In a sample with nominal composition BiCr2S5 a new misfit layer compound has been synthesized and studied via transmission electron microscopy (TEM). It presents a composite modulated structure with a composition that can be formulated as (BiS)1.19[(CrS2)-Bi1/3-(CrS2)]. It consists of the periodic stacking of a Q layer (BiS) with two H layers (CrS2), …QHHQHH…, with additional bismuth atoms inserted between the H layers. Selected area electron diffraction (SAED) patterns show an almost commensurate fit between the pseudo-tetragonal Q (BiS) and the pseudo-orthohexagonal H (Bi1/3Cr2S4) subcells along the misfit direction a, being b the same for both sublattices and c the layers stacking direction. In addition to the characteristic misfit modulation between the two sub-structures, a second modulation is observed in the H sub-structure produced by the ordering of bismuth atoms within the Van der Waals gap that occurs between consecutive H layers. High resolution transmission electron microscopy (HRTEM) and scanning transmission electron microscopy (STEM) images show ordered stacking sequences between the (BiS) and (Bi1/3Cr2S4) layers. Besides, disordered intergrowths have been occasionally found as well as different kinds of twinning defects.

Al:ZnO layers, with low and high Al content, 0.2% and 2.1% cat. respectively, have been prepared using the RF magnetron sputtering technique. Noticeable differences in the optical and electrical properties have been detected in these films. With doping, the resistivity decreases and the band-gap increases. The alterations in the films crystalline structure are explained in terms of the nanostructural changes induced by Al substitutional doping, such as a higher concentration of edge dislocation defects and a higher rotation of crystalline nanodomains in the plane of the films (normal to the preferential orientation c-axis) for the high content Al:ZnO layer. A complete description of such effects has been accomplished using several characterization techniques, such as X-ray diffraction, Raman spectroscopy and transmission electron microscopy. The combination of these techniques provides an exhaustive understanding of the films nanostructure.

The present work reports the processing of laser irradiated Si arrays (LISi) and underlines their surface enhanced Raman scattering (SERS) functionality. A nanostructured Si/SiOx surface forms providing additional fluidic and photoprotective properties. Because of their optical and surface characteristics, the arrays exhibit a SERS analytical enhancing factor of 500, without any noble metals such as gold or silver. Micro-Raman maps allowed studying LISi properties, identifying maximum amplification in nanostructured areas characterized by the presence of 7 nm Si nanocrystals. These structures are confined by a SiOx layer as illustrated by XPS valence band measurements. The highly hydrophilic LISi areas allow a pre-concentration of target molecules prior to SERS analysis. A relevant application of LISi was found in the detection of apomorphine (APO), a drug used for the treatment of Parkinson’s disease. In contrast with what is obtained by using gold SERS substrates, LISi allows the detection of APO with no sign of oxidation. This invites for the use of the Si/SiOx SERS detection in future systems for the personalized delivery of APO.

We have studied the radiation damage in diamond as a function of layer depth upon self-ion implantation with 9-MeV carbon ions and its recovery after annealing at 1000°C. Raman and photoluminescence spectra show substantial damage of the lattice, namely, amorphization, neutral vacancies, and interstitial defects. Damage is maximum in the stopping layer at a depth of 4 μm. After annealing there is some recovery of the lattice, but the residual damage increases with fluence, up to about 2 × 1016 ions/cm2. At this fluence the stopping layer becomes highly disordered and does not heal with annealing. Surprisingly, for higher fluence values, of about 5 × 1016 ions/cm2, there is almost no residual damage. After full amorphization is reached, the layers appear to recrystallize by solid phase epitaxy (SPE), using the pristine diamond layers underneath as a template. These results prove that graphitization of diamond after annealing can be avoided in deeply buried layers, implanted at fluences much higher than expected. High fluences, in fact, can lead to high quality diamond layers. If SPE can be confirmed, it would have a great interest for diamond device applications, as it allows for higher doping levels.

Characterization of the interface between highly conductive Ga:ZnO films and the silicon substrate

Work in collaboration with the Nanotech Unit, Department of Applied Physics I, University of Malaga, Spain.

Gallium-doped zinc oxide films are an interesting alternative for transparent conductive materials. To improve their performance, the interface between the grown layer and the substrate must be fully understood. Accordingly, ZnO and Ga:ZnO films have been deposited onto p-type doped Si (111) substrates by magnetron sputtering for 1, 2, 3 and 20 min and their interfaces characterized by transmission electron microscopy, photoelectron spectroscopy, spectroscopic ellipsometry and impedance spectroscopy. The combination of transmission electron microscopy techniques suggested a more complex interface chemistry in the Ga:ZnO/Si case, a point confirmed by x-ray photoelectron spectroscopy measurements on very thin films. While the ZnO/Si interface consists mostly of silicon oxides, zinc silicates and some Zn0, the Ga:ZnO/Si interface, besides these constituents, has a noticeable amount of Ga:ZnO and small quantities of Ga0. The band alignment deduced from the photoelectron spectroscopy measurements, together with the layers and Si band gap values, evidences a higher work function for the doped film and a smaller conduction band barrier for the Ga:ZnO/Si interface. Concerning the optical and electrical characteristics, spectroscopic ellipsometry revealed no significant differences between the two interfaces, while impedance spectroscopy measurements demonstrated that the Ga:ZnO/Si interface is less resistive than the ZnO/Si one.